I started to learn German using an app on my phone, Duolingo.
Now I'm one of those people that have been fighting a losing battle to keep the idea of MOOC's, or education on-line free. Or at least the European model, rather than the US one. But I've found generally there is very little credit given by universities that would allow transfer into an intra mural course even if they are the ones providing it. So in effect the MOOC was nothing more than a taster for the paid course.
And then you have the issue with who finances the running of these courses.

Anywoos, over the last number of years I've taken courses to test what's out there and I can say that by far this course by Duolingo (run out of Pennsylvania someplace) using the users to test the app's is the best I've seen so far. Even though it has at times been incredibly frustrating. For the people administrating the App seem to have little if any idea about what motivates people, particularly the usage of fuel gauges.

Anyways I have 2430 words of German with about half fully sunk in. Enough that I can get the run of a German TV programme.
I know it doesn't seem a lot but it amounts to 222 consecutive days -8th of Sept ish- devoting an hour a day ishy. I finished the course in early February, and now it's a practice routine to get the words sunk in.
Plus. It seemed a better use of waiting for whatever to learn a language than fiddling with Facebook.
PS. I was at 47% earlier today, but because I didn't get much in the number dropped. 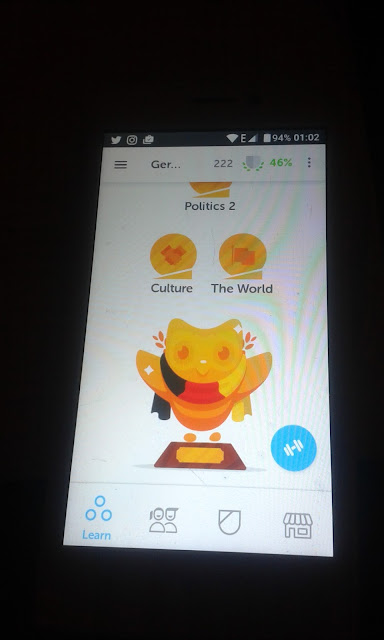