I painted the shed with timber protector which also had a colour in it.
Now when I put on the first few feet of it I was somewhat disjointed for I was covering a weird Prussian blue with a queer babyshit brown that was supposed to be mid oak.
Well, it turned out fairly OK. I would've liked it to be a tad less but it's OK. And It's been remarkably useful when needing a place that is dark to load film. But not so much for the actual developing itself.
I will probably put another coat during the summer.

The colour darkened from this. 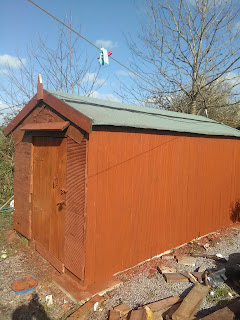